The High Salaries of CEOs of The Largest Children's Charities 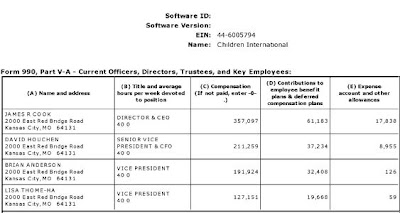 Are you aware of the salaries of the CEOs of childrens charities? As of September 2008, Jim Cook, President of Children International made an impressive combined compensation of $436'183. Cook's income overtook World Vision's Richard Stearns healthy $421'181.

Frankly, I have no problem with what these guys make if they would only be open about it. All charities are required to state their executives salaries to the IRS in a form 990, which is where I found the information. But unlike most charities, Children International does not place their form 990 on their website. Their website directs the visitor to go to GuideStar's website to find it. Guidestar, a charity watchdog, does not publicly display form 990. You have to register in order to find it. So, in order to learn Cook's salary, you really need to dig around. However, I was able to find Cook's salary from the Foundation Finder Data bank, without registering. You can too. Or you can click on the image above, which I have copied for you.

What I would REALLY like to see is charities being required to openly state the salaries of their executives on their website. Sure, some will tell you how much of your dollar is going to their projects. Many will proudly state for example "81 cents from every dollar you donate goes to this or that program." But NONE of them reveal the salaries of their executives on their websites. Why? Because their executives salaries are usually going to be many times higher than their average donor and they KNOW that if they list their salaries, many donors will be outraged.

While I do not argue that many of the charities are helping children, I do not agree that executivies should get rich doing so. I believe that charity executives should make a reasonable salary. Of course they should not live in poverty. But if they are looking for such high salaries, they should not be in the the so called "non-profit" sector. However, if they would just be open and inform their donors of what they are doing, it would be another story. If charities informed their donors of the executives' salaries and the donors want to donate anyway, by all means they should do so. But for these charities to use the impoverished plight of the children to plead for donations and fail to reveal that their CEOs are using the donations to enjoy luxurious lifestyles is, in my opinion very, very wrong.

How do they get you to donate? They make you feel a certain guilt, a certain responsibility. Their message is this: "You enjoy prosperity. You enjoy a nice life. Our children are in dire poverty PLEASE help our children. It is only $20 or $30/month. You won't miss it and it will make their lives so much better." Of course they fail to mention "Oh, by the way, our CEO will take nearly $0.5 million off of the top."

I want to see Mr Cook and Mr Stearns be honest with their donors. I want them to tell their donors how much go into their pockets, because few know it. I have done an informal survey on my article about childrens charities CEO's salaries. I have asked visitors "Did you realize that Children's Charity Execs Were Making Such High Salaries?" From 27 people surveyed, 60% reported having no idea that the charity execs were making so much money. When I began donating to Children International, I had no idea I was really helping to finance Mr Cook's lavish lifestyle. After finding out, I kept donating until my child left the program and I stopped.

If you happen to donate to any of these charities, I encourage you to forward a link or copy of this post to them. Ask why they do not reveal their executive's salary on the website. In 2004 while I was a donor, I wrote to Children International about the high salary and the rapid growth rate of Mr Cook's salary. Their response was "We feel that looking just at the salary of one individual or a handful of individuals is to miss the big picture and to get a mistaken impression. We could pay less and require less of our employees in terms of skills, experience and performance, but we feel the resulting inefficiencies would end up costing us more in the aggregate and benefiting the children less.". Why don't they post such a statement together with their executives' salary by year and let donors make an informed decision? They don't say. Children International ignored two follow-up letters from me. If any tells you, I will be pleased to post their response on this blog. But I doubt any will.

The ADA and George H.W.Bush

Remembering George H.W.Bush
Do you happen to know the link between George H.W. Bush , the 41-st President of the USA , who died on November 30,2018 and the ADA, an equivalent to the Civil Rights Act ? Many changes occurred in the world during his term in office , but the disability community will remember him for signing the ADA-Americans with disabilities Act in 1990. But actually G.H.W.Bush expanded rights of millions. The ADA did far more than just require places to be accessible. It finally brought disability rights into public consciousness.It is the first comprehensive list of laws specifically addressing the rights of people with disabilities. It radically challenged old, discriminatory laws, and touched almost every area of society, as transportation and employment policies were uppdated. For the first time in history, the United States government officially defined the rights of people with disabilities. It ultimately changed the way America viewed people with disabilities as …

A Wheelchair User in a Kayak