Posted by RehaDesign on November 29, 2020
I want to thank Colby Underhill for this excellent review of the RoughRider Wheelchair, which he submitted a few days after he bought it.

First, the bad. The chair is designed with the caster wheels directly under the footrests, rather than under your thighs like on most chairs. This leads to the front part of the chair, the footrests essentially, sticking out a bit in the front. This design is essential for the function of the chair, as I’ll describe below, but it makes it a bit more difficult than a regular wheelchair to use indoors. For example, if you have a standard kitchen you won’t be able to wheel up close to the countertop or sink. I was able to compensate for this by skootching forward and balancing on the edge of my seat when I needed to get close to something, and my gel seat cushion made this easier, but someone with poor upper body strength or control would definitely have problems doing that. Also, the chair is a bit heavier than average, which may make it tough for someone with poor hand / arm strength to move.
Take it outdoors, however, and you may just fall in love with it. I don’t live in a third world country, but a previously downtrodden neighborhood in Chicago that is now undergoing gentrification. The legacy as a previously ‘bad’ part of town is sill evident in its sidewalks. Here are sections uplifted an inch or two by tree roots or general negligence, driveways to cross that look like they haven’t been resurfaced in decades, generally broken and uneven sidewalks, a curb cut with potholes where the cut meets the road (an incredibly dangerous situation for a normal wheelchair), sidewalk sections temporarily replaced by gravel due to construction, etc, etc… These are all things I faced just going a few blocks to Walgreens and back, they aren’t rare or far apart. Navigating this was highly unpleasant in my old Drive chair. I had to take it slow and constantly felt like I was going to flip the chair or it was gonna shake itself apart and randomly drop bits behind me. At that curb cut I had to actually go around the corner instead until I could get to a driveway where I could cross before returning to my path. The Whirlwind Roughrider changes everything. I can go full-bore fast over all of this terrain without feeling more than a slight bump. I blast right over that curb-cut from hell without even slightly feeling like I’m gonna flip.
The awesome thing about this chair is the sense of freedom it gives me. Taking my chair out no longer has to be the big, trepidation-inducing production, filled with fear of the slightest bumpy terrain. I can wheel up the block or down the street, or the mile or so trip into the neighborhood center, and just fucking enjoy myself for once. I even wheeled intro the center of the local park for lunch with my partner, across the grass with potholes, leaves, and branches in my path. That brings up another positive aspect of this chair: it encourages one to go out on it and get good exercise. The old, standard wheelchair encouraged me to avoid going out as much as possible. 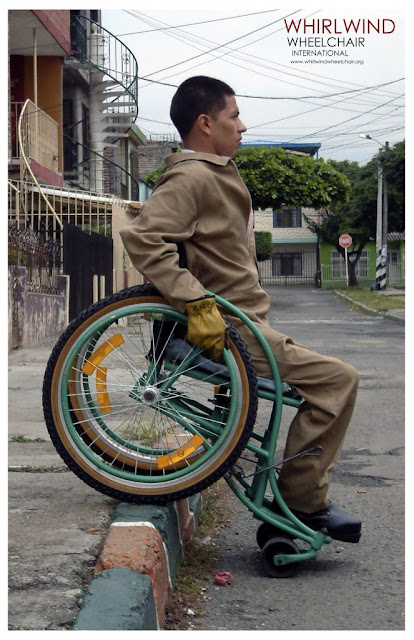 The chair achieves it’s incredible rough-terrain performance due to a couple of things. There is the pneumatic back tires, which do a good job of cushioning bumps and gripping the surface. I can even get knobby tires to wheel through snow if I want. My old chair would badly move over even a light dusting of snow. The biggest improvement is the wheel positioning. The front casters are below the foot rests, which takes a lot of the weight off of them. You’re center of gravity is relatively farther back, and the front has a slight tendency to tilt up. This causes the casters to tend to pop up and glide over bumps, rather than getting pulled down into them. On a standard wheelchair, the casters are right below your thighs and bear a greater amount of your bodyweight. In that standard chair, when the casters hit a pothole or something, your body weight tends to press them directly into the obstacle, making bumps and uneven terrain dangerous to deal with. The RoughRider overcomes this problem effectively, at the expense of having the footrests / caster mounts getting in the way in close quarters.
A few things not mentioned by Colby The RoughRider wheelchair is a folding wheelchair and weighs 44-45 lbs (20kg) or about twice the weight of a typical ultralightweight wheelchair. The cost is less than half of the typical ultralight wheelchair, however. Typically it sells for $900, but as I write this it is on sale for $450. I have no idea how long this sale price will last.  There are discounts for people living in developing countries. The video below demonstrates the versatility of this amazing wheelchair.