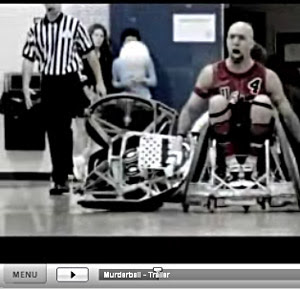 On September 20, 1973 the world watched a young woman kick an aging man's butt across a tennis court. Billy Jean King's defeat of Bobby Riggs in the "Battle of the Sexes" went down in history as a break through match for women's tennis. Before then, few were interested in watching women's tennis and women tennis players earned a fraction of male tennis players. After that game, the masses began to accept women professional tennis players as serious athletes.

Of course, this was not the only step in bringing women's tennis out of the shadows and into the spotlight. But it was a very important step. And even though the match was not an even match, Riggs was 55 years old and out of shape while King was a 29 year old champion, it proved something to the masses. Before that game, women tennis players were simply not taken seriously. By winning the game, King made the world take note that women were serious contenders.

Quad Rugby shares a similar image to women's tennis of that time. Basically, outside a small insider crowd, the game is hardly seen. There is almost zero media attention. Since few know how exciting the game really is there virtually no mass appeal.

If you have never seen women's professional tennis before, you might imagine it to be rather boring. Who wants to see a bunch of women tapping a ball over a net? Once you have seen women's tennis, you know that it is every bit as exciting as men's tennis. Similarly if you have not seen quad rugby, you might imagine a bunch of sad disabled guys rolling around a court. Once you have seen it, you understand that quad rugby is every bit as exciting as any professional game.

How could quad rugby be brought into the spotlight? Create a demonstration match based on the Riggs vs King game. It does not matter if it is a fair match. It only matters that it peaks the interest so that people can see the game as it really is.

I propose a demonstration match between a top quad rugby team and a top professional NFL team. Or better yet the best NFL team; the Super Bowl team. Such a demonstration match would create a media frenzy. Top professional football players taking on a bunch of paralyzed guys? The image alone is almost frightening. Such an image would draw alot of attention to the sport, the way that the tennis match between Billy Jean King and Bobby Riggs brought attention to women's tennis.

Give the NFL team 1-2 weeks to train. Bring in Joe Soares, the bad boy American coach of the Canadian quad rugby team which kicked the US Team's butt in the paralympics. Soars' presence would help to bring some tension into the game.

Would the match be fair? Absolutely not. Who would win? Frankly, I have no idea. I don't think it really matters. The ultimate winner would be the sport of quad rugby.

Watch the trailor from "Murderball" the Acadamy Award Nominated Documentary about Quad Rugby: