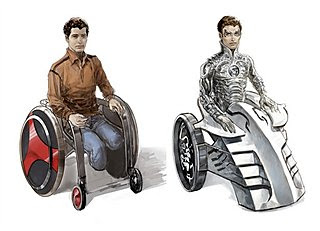 Photo From Liquid Comics
I am delighted to see that attitudes towards people with disabilities are changing to the point that some Super Heros use wheelchairs. For example, Silver Scorpion is a new Super Hero who is a disabled muslim boy. According to this article in Time Magazine:

The Silver Scorpion is the brainchild of a group of young disability advocates from the U.S. and Syria. Brought together at the first international Youth Ability Summit in Damascus in August 2010, the attendees, who are all disabled, were asked to create a superhero who reflects what they have always wanted to see in a comic book.

But The Silver Scorpion is not the first Wheelchair Using Super Heros. Soldier Zero is an ex-marine who "While on a trip back home from Afghanistan his convoy was attacked by a bombing, which killed his entire team and also rendered him unable to walk!"

From 1966 to 1988, Barbara Gordon was the superheroine Batgirl; since 1989 she has been known as Oracle. In "Batman: The Killing Joke" Barbara was shot and and paralyzed by the Joker.

Takashi "Taki" Matsuya or sometimes called the Wiz Kid who "lost his parents and his ability to walk in a car accident".

The list of Super Heros in Wheelchairs go on. Why? Because comic book publishers are trying to creat characters with whom they can identify. Since 1% of the population uses wheelchairs, it makes sense that some of the Superheros should use them as well. Why don't Hollywood producers understand this when they use able-bodied actors to play the roles of wheelchair users?

Not all Superheros who use wheelchairs are fictional. Read about Aaron Fortheringham, the first person to do a backflip in a Wheelchair or Martin Braxenthalerthe the most successful mono-skier in the history.
wheelchair hero