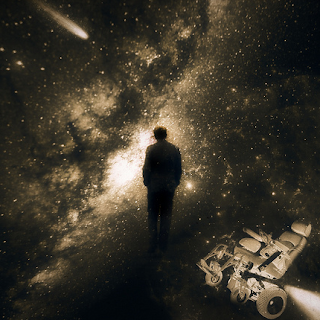 His body was not able to move, his body was perpetually seated in a wheelchair, his body couldn’t walk, run, jump or dance, furthermore he was not able to speak. However, he could communicate, he could live and he could think better than anyone else. He was the chairman of mathematics at the University of Cambridge for about 30 years, he has contributed to the elaboration of numerous physical and astronomical theories.Therefore the question we are going to ask today is : could our mind transcend the limits of the human body? There was a man, who dedicated his life to answering this question, giving daily confirmation that this is possible. In 1963 this man was diagnosed a form of the motor-neuron disease amyotrophic lateral sclerosis (ALS), a disease that day after day deprives you of the power to move your body until it is fatal. Life expectancy was not very long, but the willpower of this man not only led him to the study of the most exceptional laws of physics, but he even challenged them and rewrote them. He managed to survive for about 55 years past his diagnosis, and he died on March 14, 2018

The man we are talking about is Stephen William Hawking, one of the most brilliant minds of all time, a rare man who decided to make his life a masterpiece, the perfect example of those who have placed their focus on what can you do and not on what can’t you do.

I would like to share some of his teachings, so as to draw strength from his words because basically he was a human being like many others, and if he could do great things, each of us can. Surely we will not all become astrophysicist, but each of us is able to get out of our own black hole.

1) The first teaching is proper about black holes, Stephen Hawking said: "black holes ain't as black as they are painted. They are not the eternal prisons they were once thought. Things can get out of a black hole both on the outside and possibly to another universe. So if you feel you are in a black hole, don't give up – there's a way out.” Have you ever found yourself in a black hole? I certainly don’t refer to those we are or we are not used to seeing in space, we refer to particular moments of our life where we don’t see the way out. Hawking teaches us that in the hard times, we must not give in to anger, and we must learn to laugh at ourselves, these are the factors that lead us to keep the fire of hope burning. Remember there is no solution without hope, and if it was possible to understand that there is a way out of the black holes of the universe, I think there are great chances to get out of the black holes of our lives.

2) “The greatest enemy of knowledge is not ignorance, it is the illusion of knowledge”. In this quote the great astrophysicist invites us to be humble. Hawking summarized, albeit with different words, what the great Greek philosopher Socrates had said thousands of years ago: "I know I do not know". Being presumed to know everything, without questioning what is believed to be true, leads the world to block itself in its process of evolution. Absolute truth does not exist, it is only a process that evolves over time.

3) “My expectations were reduced to zero when I was 21. Everything since then has been a bonus." Suffering is the difference between what is expected and what is obtained. What do you think of reducing the number of expectations we have in our mind? If we do it, personal suffering would be reduced and our happiness and serenity would increase.

4) "My advice to other disabled people would be, concentrate on things your disability doesn't prevent you doing well, and don't regret the things it interferes with. Don't bedisabled in spirit, as well as physically". This sentence could only be said by Hawking. He understood that life is a precious gift, and that nothing has the power to destroy his beauty. And that's why Hawking never gave up, and always focused on the immense things he could do with his mind, rather than focusing on what he could not do with his body.

5) “When you are faced with the possibility of an early death, you realize that life is worth living and that there are a lot of things you want to do.” In a famous movie called Troy, Achilles said "The Gods envy us because every moment for us could be the last". Death, and the limitation of things, make things special. Stephen Hawking understood that. He knew that we have the great fortune to be alive, and the idea that every moment could be the last gives to the life an unlimited value. This moment is not useless, it's just one of those special moments that make your life special, don’t waste it.