Posted by RehaDesign on April 12, 2010
Last year many in the disability community were outraged that the producers of Glee chose an able bodied actor to play the role of Artie a wheelchair user. I blogged about my disappointment that with all of the talented wheelchair users in the world, the Glee producers could not find one person to cast in that role.

The producers of Glee have gotten the message and have cast Zack Weinstein, a wheelchair users in a role in the show. You can be introduced to Zack by watching this video below:

Watching the video, I can see that Zack Weinstein is a pretty cool guy. I would enjoy interviewing Zack and getting to know him better.

But Zack states in his blog post that he does not care if able bodied people are cast in the role of disabled people. I would only like to say to Zack that one day in the future I may agree with him. However, today it is important that barriers to people with disabilities come down. It is critical that people with disabilities be given as many opportunities as possible. Why?

Perhaps Zack, because of the opportunity that you currently have we will someday be able to name at least one famous wheelchair using actor. I sincerely hope so. Zack Weinstein : You are breaking down barriers and I wish you the best of luck in your career.
wheelchair hero 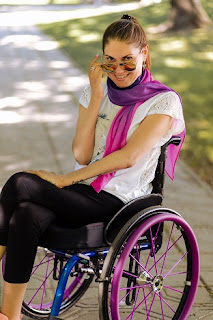 Stylish Wheelchair? These words seem like an oxymoron or contradictory terms to many people. Wheelchair users can't be stylish, can they? Some people think that wheelchairs are too serious to have style. Many wheelchair users avoid styling their ride because they do not want to draw attention to themselves. People are always staring anyway, so why attract even more attention?

To many people with disabilities a wheelchair is like a part of the body. A wheelchair is the "legs" of a paralyzed person or the foot of an amputee. A wheelchair can be help someone with Cerebral Palsy be an athlete or it can give someone with an invisible disability like chronic fatigue the ability to be mobile again. But it can also be a thing of beauty. With the right accessories a wheelchair can color coordinate with your clothes. It can enhance the look of your dyed hair. It can change from something drab and boring to something fun. Who says a wheelchair must be a serious medical device? Wh…